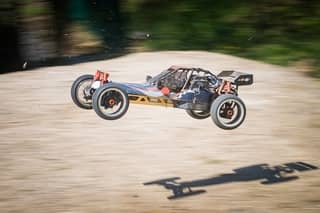 How to Break in your Nitro RC Car Engine

Engine break in is a crucial step for any nitro RC car. The process should be performed before the first time you use your engine and on every new engine after that. There are many reasons why you should always break in an engine, but here are just a few:
The benefits of breaking in an engine include increased power, smoother idle, and less wear on parts because they’ll last longer. You’ll also save gas or fuel because it will be more efficient if the cylinder walls have been properly lubricated with oil beforehand.
If you haven’t broken in your nitro RC car’s engine yet don’t worry! Today I’m going to show you how to do it by step-by-step instructions.

When I was breaking in my new nitro engine I was thinking that for a beginner the process could seem a little daunting.

Every new nitro RC car engine is required to undergo the break in.

Its sole purpose in the process is to make sure that you achieve maximum performance and ensure the durability of the different engine parts.

The process is not as easy as most people think, but on the other it is not that hard either.

All have to do is follow the right procedure, and at the end of the day you will end up with a nitro engine that performs reliably without constantly breaking down.

The break in process will only take you a couple of hours and a few tanks of nitro fuel to get it completely done.

Patience is a key factor and in fact is mandatory during this process.

Critical checks before breaking in

Before performing any RC engine break in, there are a few checks you need to perform.

This is good practise as you do not want to end up getting stuck later in the process.

First, you will need to read and understand the manual to know the settings of nitro engine you are using. This will also tell you where to locate the screws of your carburettor.

To prepare your RC nitro for breaking, you will have to connect the glow plug to the top of the cylinder head but make sure you don’t make it too tight.

Once done, you will need to fill your cars fuel tank.

The next step is very important switch on the transmitter and making sure that the brake, throttle, and steering servos are responsive.

As soon as you are certain everything is working fine, go ahead and set the carburettor needle to factory position.

You can confirm with the user manual to make sure that you have the right configuration.

The break in procedure

The number of tanks of fuel you use can vary I always use 8 tanks this is for my own peace of mind that the engine has been broken in and will not give any issues in the future.

If you want you use less I would recommend no less than 5 tanks this would be the minimum.

Make sure the engine fuel is at the carburettor, connect the starter and start the engine.

Run the engine at low speed, to be precise; you should not go beyond a quarter throttle.

Throughout the process, monitor the engine’s temperature.

You should run your RC nitro car until the fuel is almost empty.

Make sure you do not run on an empty tank to prevent damaging the engine at this early stage.

Check to confirm that the piston head is at the bottom of the cylinder then leave your RC car to cool down.

This should take about 15 to 20 minutes. You can then proceed to the next tank.

Start the engine then let it idle for some seconds.

You should then run it at half throttle as you check the temperature just like you did the first tank.

If that’s not the case, you will have to configure it manually.

If it is too low, locate the speed needle and give it a clockwise turn of 1/16.

But if the temperature is above, you should give the high speed needle 1/16 turn in the anti-clockwise direction.

Run the engine until when the tank is about to be empty then confirm the piston is at the bottom of the cylinder.

Switch off the engine and give it time to cool down completely.

On this tank, you RC nitro cars should be gaining momentum, and so you should be able to give it a high throttle.

Lean the engine by giving the high speed needle a 1/16 turn clockwise.

Go ahead and start the engine and this time run it at 3/4 throttle.

Maintain the speed for 2 to 3 minutes, check the temperature to make sure that it ranges between 205F and 220F.

It should not be too low or too high.

Continue running it until when the fuel is about to be empty then stop it. Ensure the piston is at BCD then let it to cool for 15 to 20 minutes.

Before you start the engine on your fourth tank all the way to the sixth tank, you need to turn the high speed needle 1/8 clockwise.

Once this is done, start the RC nitro car and repeat all the steps you did in tank three.

The temperature should be maintained and so should the throttle.

This step four should be done until you reach the 6th tank of nitro.

This is the stage where the break in process starts taking course.

Start the engine then run it at an average speed while ensuring the temperature is between 210F and 230F.

Once this is done, go to high speed until you see blue smoke coming out of the pipe.

Once you are done stop the engine and let it cool down completely. For tank 8 repeat the above steps in seven.

Safety precautions to take while breaking in the RC nitro engine

While performing the break in, there are various safety precautions that you should take.

Make sure that throughout the process you don’t run the engine on an empty tank.

This will end up ruining your engine.

You also avoid touching the engine immediately after running, it tends to be too hot and ensure you keep the nitro fuel away from the engine after running because it is highly flammable.

It will take you a maximum of eight tanks of fuel for the engine to break in.

After you break the RC nitro car, make sure that you never run the engine with the radio off and never go extremely rich because this will put stress on your engine.

These procedures will ensure that your RC car gives you the best performance.

After the break in process is finished and every time you run your engine there will be some after running maintenance to be done.

. Remove the glow plug and put a few drops of after run oil into the cylinder, pull on the start cord a few times to make sure the oil is spread evenly.

. Drain any unused fuel from the engine, nitro fuel absorbs water and will cause the engine internals to rust so it is very important that this job is done.

. Clean the fuel filter make sure it free flowing.

. Remove and clean the air filter assembly, wash the element in warm soapy water leave to dry and then add a few drops of air filter oil.

. Clear any dirt and debris from engine.

. Make sure engine is completely cool before attempting any maintenance.

Follow these steps and your nitro engine will have a long life and you will have loads of fun.

How to Store Your Nitro RC Car over Winter

How to Service and Maintain Your Nitro RC Car